Unfinished No. 37: The Process

This is the first of a two-part series all about one particular piece of art I just finished. In this post, I’ll lay out the process of the painting, from start to finish. In the second one, you’ll get a personal look at the concept and the meaning behind it. So without further ado, I present to you….


This painting began like most paintings do: my mother carried in a big box of origami paper and said I was welcome to it.

Just kidding, that’s probably not how most paintings begin! But as far back as I can remember, I’ve loved origami. I’m fascinated by how a simple sheet of paper can transform into a 3-dimensional, angular little creature to play with or display. I used to have a collection of origami horses I’d made, all in different poses and colors (realistic and otherwise). I drew on little eyes and nostrils, and sometimes little markings on their feet or appaloosa spots on their bodies. I used to race them across my little desk. It was a complicated, two-sheet origami pattern, but I’d memorized the instructions and happily made them anytime, anywhere. I even added a little paper unicorn horn or pegasus wings to some of them!

Fast forward a few years… I might still be able to fold a little origami horse, though I haven’t tried in a while. But when my mom brought in that box of origami paper, I thought I’d look up instructions to make another creature which has always inspired me: a swallow.

I haven’t felt much creative inspiration this year. So when that little origami inspiration winged its way into my mind, I had to jump on it. I started making more paper birds, sketching swallows and mountains in my journal and sketchbook, and mulling over colors and techniques.

In just a matter of weeks, that little silver paper bird quickly inspired this, my largest painting yet, and one of the few paintings I’ve finished and been really pleased with.

I’ll be honest, I struggle with paint. I originally intended for this to be a collage, though I did really want the paint to be successful. If all went really well, it would be a very paint-heavy collage. I planned to layer paint, colored paper, and other materials until I reached the depth and movement I was going for. I didn’t necessarily have it “all planned out”, but I did have some ideas.

Well, the paint aspect went much better than expected. In fact, except for the underpainting and the paper bird, the entire piece is paint!

For the underpainting. I started with one of my favorite materials, chalk pastels. I blocked in the colors, the highlights, and the shadows.

I loosely followed a method of underpainting which calls for using the opposite colors underneath. This gives the colors of the finished piece a saturation and contrast which just doesn’t happen when you put them straight on white (or black, I guess) canvas. For example, if you want to paint a green tree, the green will be much more vibrant if you paint a red layer underneath. Color theory is weird, so maybe we’ll talk about it more sometime.

Anyway, like I said, I sort-of followed that method.

I stuck with my extremely limited palette (red, purple, yellow, white, and black), but reversed the colors of the sky in the underpainting. So where I wanted the sky to end up more red, I put more purple underneath. Where I wanted more purple, I put more red. I used yellow in some of the highlighted spaces, to keep the white nice and warm and vibrant.

After that, I painted over everything with clear acrylic medium, which is basically acrylic paint without the color pigment. This latched on to the pastel layer, essentially turning the pastels into paint!

Then I slapped on a bunch of red paint to give it a really warm, minimalist second layer, as you can see above.

Finally, I started in on the actual painting, using a paint knife (also called a palette knife) to build up the mountains. This is one of my favorite painting tools! I first used it in high school to make a copy of a Paul Cezanne painting for an art history assignment. I had so much fun with that paint knife, it’s been a painting staple for me ever since.

I love the texture and movement it gives, and it’s ideal for thick painting and building up lots of paint on the surface of the canvas, which is exactly what I was going for.

I also love the little "tsing" sound of the metal against the taut canvas. It's a painting tool you can hear, too! 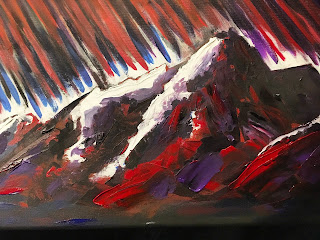 Now, acrylic has a tendency to flatten out as it dries, so I lost some of the thickness, but the paint knife still gives a texture to the paint that just wouldn’t be possibly with a brush!

Once I had the mountains pretty established, it was time to move up into the sky.

I definitely didn’t want this to veer too close to realism, so I went for a highly textured, directional approach with the sky. I angled every single stroke, big or small, thick or narrow, building up color first, sweeping back in with shadows and highlights, and then bringing the color up into balance once more.

In the detail shot to the right you can see how I almost covered all the white "glow" behind the mountains, building up the intensity of the color. Later I went back in to bring the white glow back in. 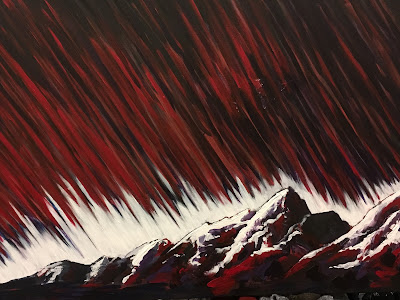 Once the thing was about 75% finished, I realized I’d entirely forgotten about my collage ideas... I’d been so wrapped up in painting, I forgot to layer in paper and other materials! So at that point, I stuck with the paint. I was feeling so good about it, for one of the first times in my life. I've always struggled with paint, working on techniques that never seemed to "click," and finally it was coming about just how I wanted!

Adding the bird was the final struggle, and what a struggle it was. I actually glued on, and subsequently removed, about 10 different origami swallows before I was happy. I started with one that I’d folded with relatively thick paper, and it just didn’t lay right on the paint. The thickness of the folded paper made the mountains look flat and lame. Not an effect I was looking for!

I also considered adding seven smaller swallows following the large one, in different shades of grey and silver. I diligently folded and glued the little birds, but after gluing them on, I still wasn’t pleased with the composition. I ended up removing those little guys, and laying down more thick paint to cover the bumpy remains of the glue. I think I like the little spots where the paint and bumpy glue come together; they’re hard to pick out, but they add a little more texture to the sky.

I ripped that off and made a new swallow from the thinner paper, but it was still too heavy for the piece...

Ultimately, I folded an origami swallow, and then cut off the thick layers of folded paper underneath, so it only looks like real origami. It’s just a few folded bits held together with glue, but it has the flatness required to meld with the rest of the painting.

Oh, and I also threw on some yellow and orange "trees" swirled about the base of the mountains.

I also struggled with how to incorporate the bird so it looked a true part of the painting, and not just a paper bird glued on. That’s where the thin strings, like broken puppet strings, come into play.

I raided my mom’s sewing stash for some plastic “invisible thread,” and lightly coated portions of that with white paint. I tied it the strings to the tips of the wings, and layered red and purple paint over a few parts to attach the thread and give it the dimensionality I wanted. You can actually slip your fingers underneath the parts of the thread that aren’t “glued” down with paint!

And that is how Unfinished no. 37 came to be.

Why is it called Unfinished no. 37, you ask? Well, I tweeted a picture at one point in the process and my friend tweeted back, asking what it would be called. I jokingly answered “Untitled no. 37” because I had no real name yet… 37 is just a random number. Later, I posted another work-in-progress photo on Instagram and jokingly called it “Unfinished no. 37." After that, I realized the working title fit in more ways than one... though the painting is, in fact, finished.

But I'm getting ahead of myself. I’ll talk more about that in part two.

See you next time!