A couple of years ago I went on a retreat with a bunch of my friends. A member of our church offered to let us spend a weekend at their summer home in Michigan, so in the middle of February we packed up and made the eight+ hour drive to the tiny ski resort town about an hours drive from the Upper Peninsula.

Despite being a really un-spectacular winter, the lake in town (not Lake Michigan, just a comparatively small lake right next to it) was frozen, so of course we decided to play on it on our first day.

On the second day there, we went into the town and hung out, bought souvenirs, and wished for more impressive snow. It had been in the mid-30s F all day, so the snow had slowly been receding, but as the sun went down everything began to freeze again. That evening, we walked the quarter mile back to the lake to see if we could walk on it some more.

The biggest guys stepped on first to make sure the ice would hold, followed by the rest of us. There were about ten or fifteen teenagers standing on the lake, marveling at the countless stars in the sky.

And then we noticed a faint greenish glow in the sky to the north. It grew a little brighter, and we knew that no, it was not lights from the town. It was the northern lights. Aurora borealis. We were amazed. I don't know how long we stood on the lake watching the Northern Lights; it was like time had stopped and it was just me, my friends, the lake, the stars, and the lights. Wow. Later we found out that was a rare sight in that part of the Michigan, so we were pretty excited.

When I went home I knew I had to draw that. I just had to. But I didn't know what medium to use or how to get the effect just right. Finally, a year later, I drew it in pastels on a piece of 12"x12" black paper. I used permanent markers to very faintly draw the horizon line, I used a lime green pastel to very faintly draw in the northern lights on one side of the sky, and then I made the white city lights on the other side, just like I'd seen in Michigan. Finally, I put in a few tiny stars here and there. Unfortunately it's all so faint and delicate that I can't get a good photograph of it, so you'll just have to trust me when I say that it looks really, really cool!

Recently, I've been missing the northern lights so much that I decided to try making another picture, this time in watercolor.

I made the "paper" substrate with white muslin fabric and white tissue paper glued together. This gave me an absorbent surface, and the wrinkles form the tissue paper are a fun effect. Then I set to work painting, and after several coats of watercolor paint and a few days of drying time, I came up with this: 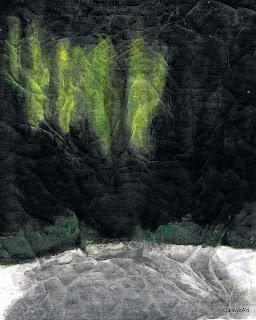 On this version the lights are brighter than what I actually saw, but I'm happy with it. I think my favorite part is the way the wrinkles in the paper-cloth make it look like there are faint cracks in the ice, and give a feeling of movement to the green lights.