Vincent van Gogh is something of a pop culture sensation right now. If his work weren't so amazing, I'd say "inexplicable pop culture sensation", because typically you don't find 19th century artwork splashed on everything from framed prints to pillows to coffee mugs to iPhone cases. And yet somehow Van Gogh managed to do that very thing with his masterpiece, Starry Night: 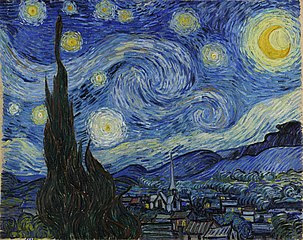 I'm not even kidding. I searched "Starry Night" on Etsy and got over 5,500 results!

I usually try to be unique and not necessarily follow the trends, but I must admit that I am a fan of the huge following Van Gogh has gained in recent years. And no, I don't like his work just because it's popular, and I do in fact know about him. And I'm pretty sure I knew about him before Starry Night exploded onto every object imaginable.

With those two facts stated, and I can tell you that I have a 2,000 piece puzzle, an umbrella, and a matted print of Starry Night. I'd probably have a lot more Starry Night things, but unfortunately I'm broke. Also I am willing to admit to you, my favorite readers, that I thoroughly enjoyed the Van Gogh episode of Doctor Who (I'm a closet fan of the Doctor).

So with all those facts and admissions out of the way, let me tell you why I like Starry Night and Vincent van Gogh.

I like Starry Night because I love stars, and it makes me think of that night in Michigan when I saw the northern lights amid all the abundant stars of the Michigan sky (to read more about that experience, hop over to this post). 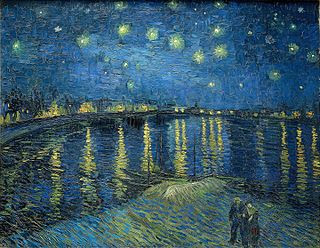 "Starry Night Over the Rhone"


With all the hype over Starry Night, I decided I need to find a lesser-known painting of his that I can claim as my "other" favorite, to avoid looking too mainstream. So this, Wheatfield With Crows, is another of my favorites of his. I think I like it because it's a little creepy; one gets a sense of foreboding when looking at it (or at least I do). It makes me want to read horror stories like those of Edgar Allen Poe (another pop culture sensation that I thoroughly enjoy).

I also like Skull of a Skeleton with Burning Cigarette, because it too is creepy. It looks like it should be some modern anti-smoking campaign, and the image has probably been used for that, but this is a real and honest 19th century Van Gogh painting. It's hanging on some wall in the Van Gogh museum in Amsterdam. It's awesome. 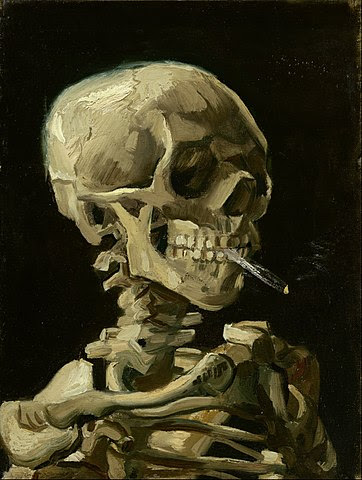 I also love his many paintings of sunflowers, one of which I copied earlier this year.

Yes, Van Gogh is one of my favorite artists. I say this not to be mainstream of to follow the crowd, but out of a real love for his work. And I'm so proud of Van Gogh, because despite his failings, depression, unpopularity during his life, and possible insanity, he's managed to post-humously become an immeasurable success story. His story gives me hope. Not to say that I'm the next Van Gogh or something, but rather in the sense that a person's sphere of influence doesn't stop at their death. Van Gogh reminds me that I have the potential to impact people and society even after I'm gone, and a lack of "success" in my life doesn't mean I'm doomed to anonymity (though anonymity isn't a big fear for me--I'm far more afraid of heights, spiders, and developing arthritis!).

P.S. There's a new Etsy listing in town! Hop on over and check out my new Sanctuary Print =)
Posted by Cailey at 10:05 AM