Today, I want to share a series of pieces I made using different media to create the same image. One version, the charcoal, is available for sale. However, if you'd like a print of one (or more) of the others contact me on Etsy and I'll see what I can do.

Anyway, I started with a photograph of my brother taken at one of my horse shows. He was about three or four at the time, and loved being there at the show because he was obsessed with all things cowboy.

my first step was to make a simple graphite drawing: 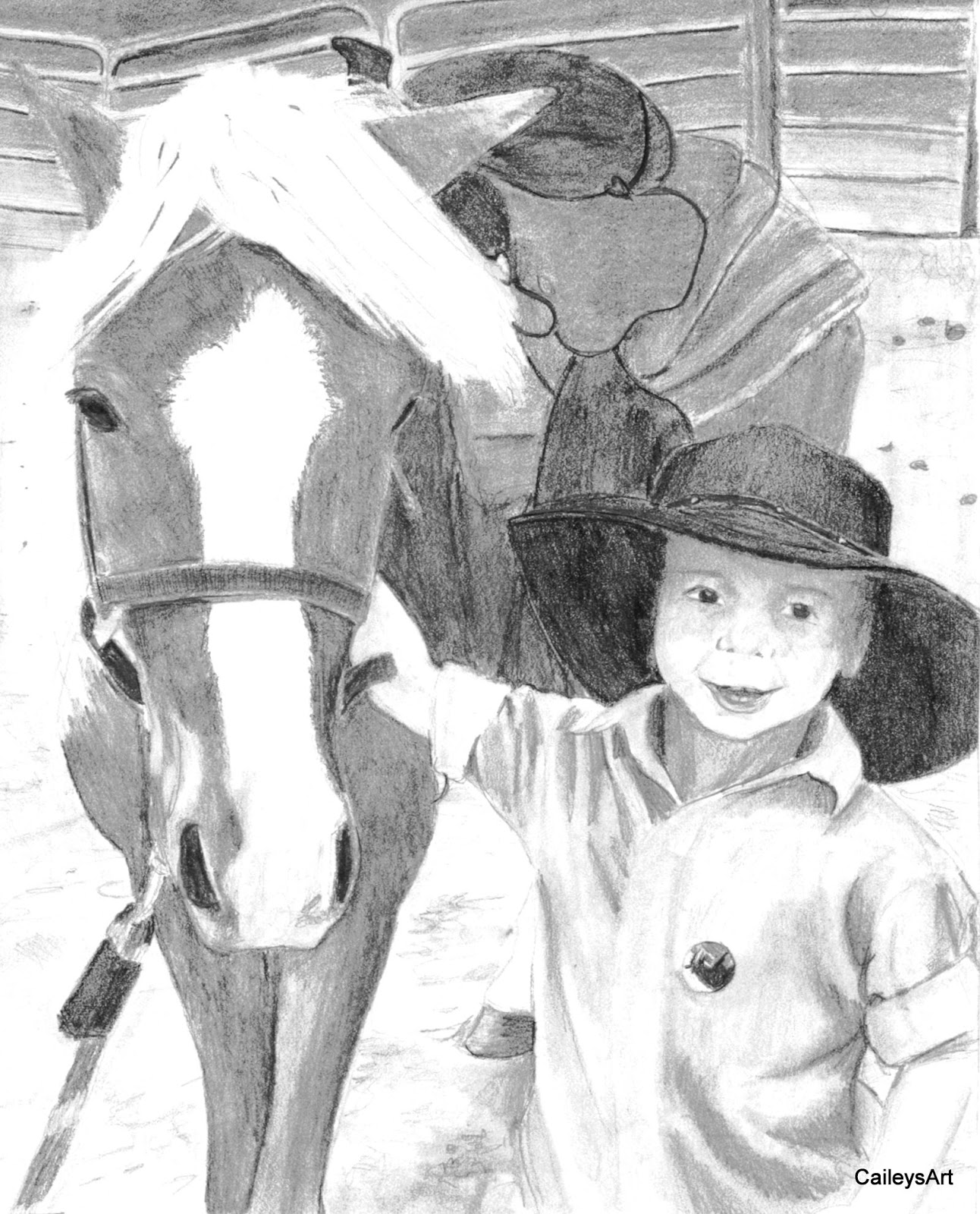 I then drew it in colored pencil in shades of yellow, green, and blue. This may seem silly and pointless, but it actually was a really good way to study the values of everything. I constantly had to think about which colored pencil to use, and I had to make choices and sometimes exaggerate the values to make it a clear image. 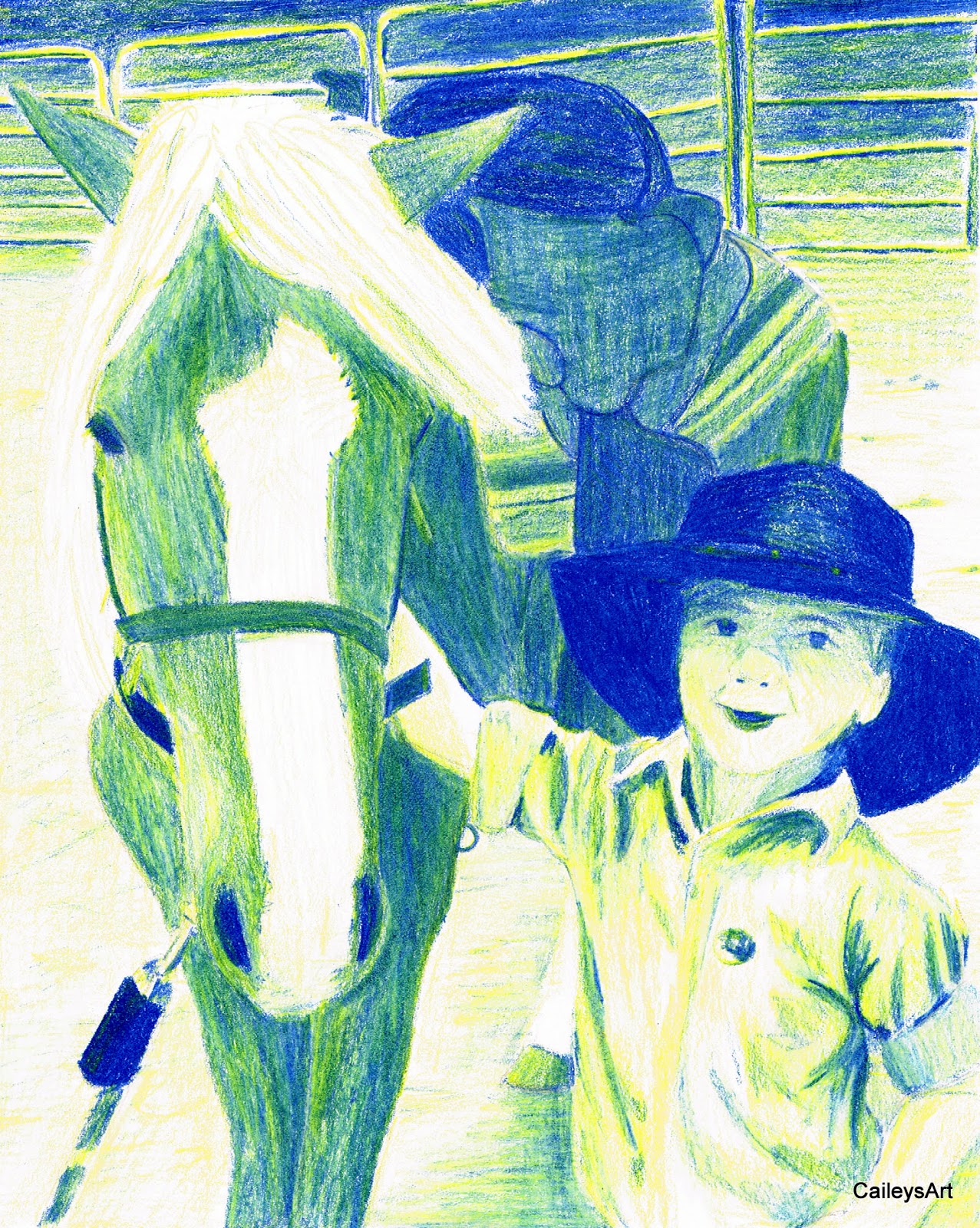 The next one, I used graph paper (8 squares per inch) to pixelate the image, this time with the original colors. With this one, I had to think about what color to use in each individual square, because I had to make each one a solid color. it was really difficult, especially on the boy's face, and the shading on the blue shirt. 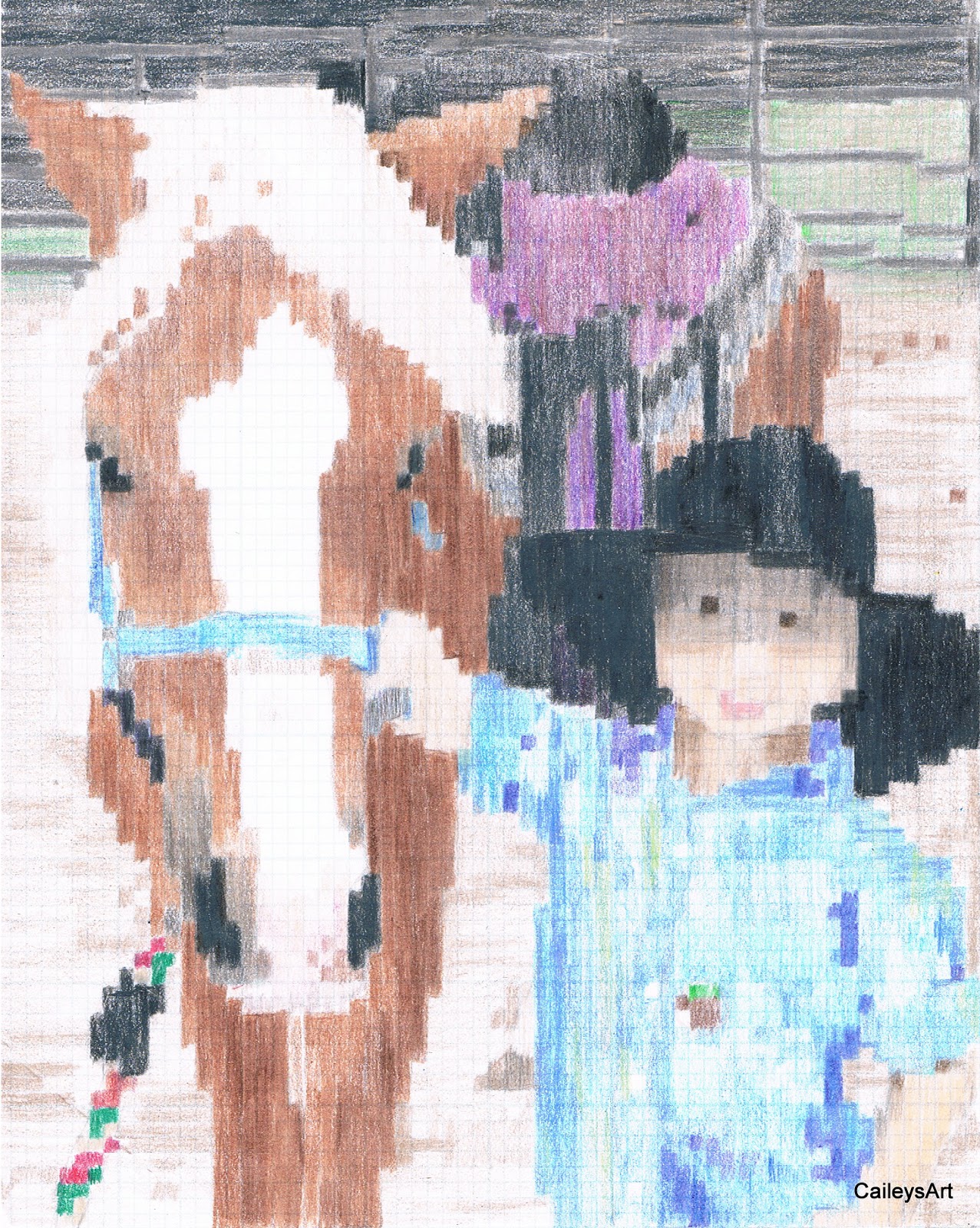 Next I made a "yarn painting" of segment of the original image. I used various colors of yarn and glued them on a piece of cardboard, as close together as possible. 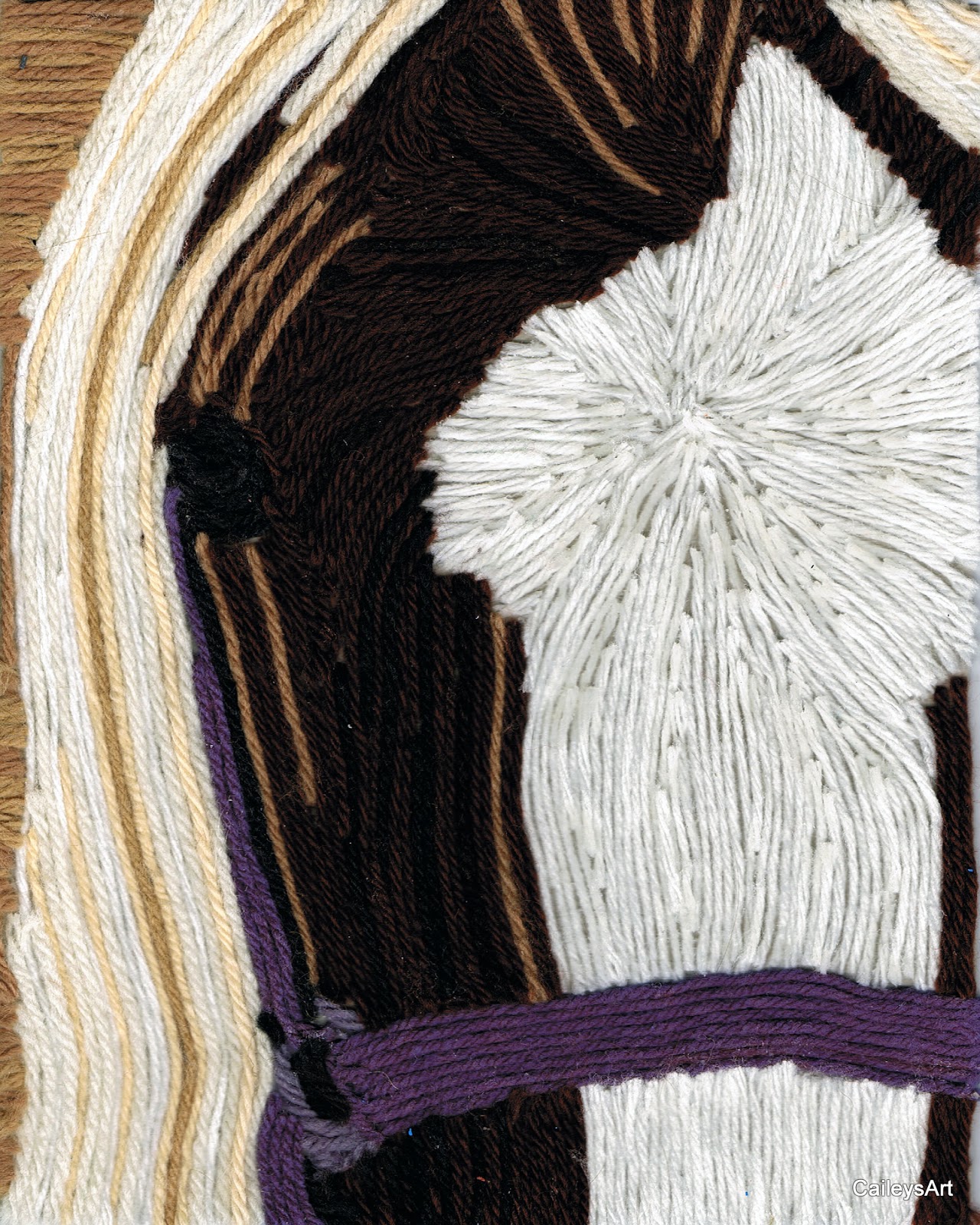 Then, I made styrofoam prints. I went to the meat section at the grocery store and asked for two of their largest styrofoam trays. I've learned, secondhand and from personal experience, that you can get lots of things like that if you say it's for an art project! Anyway, I used a pen to trace a segment of the picture (in reverse) into the styrofoam, creating indented lines. I then coated it with ink and pressed it on the paper, leaving the indented lines white. 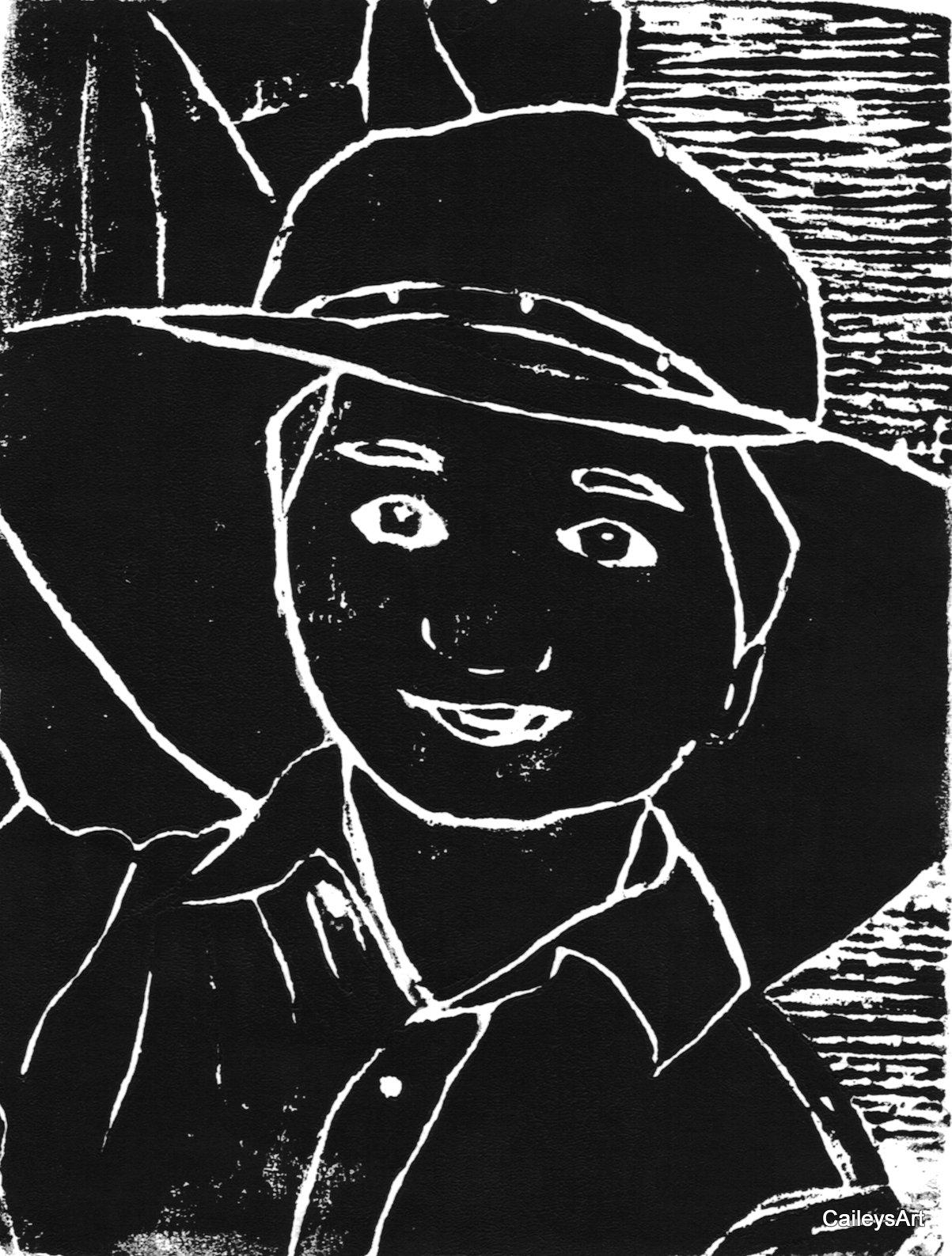 Next I did a melted wax "painting" in preparation for a batik: 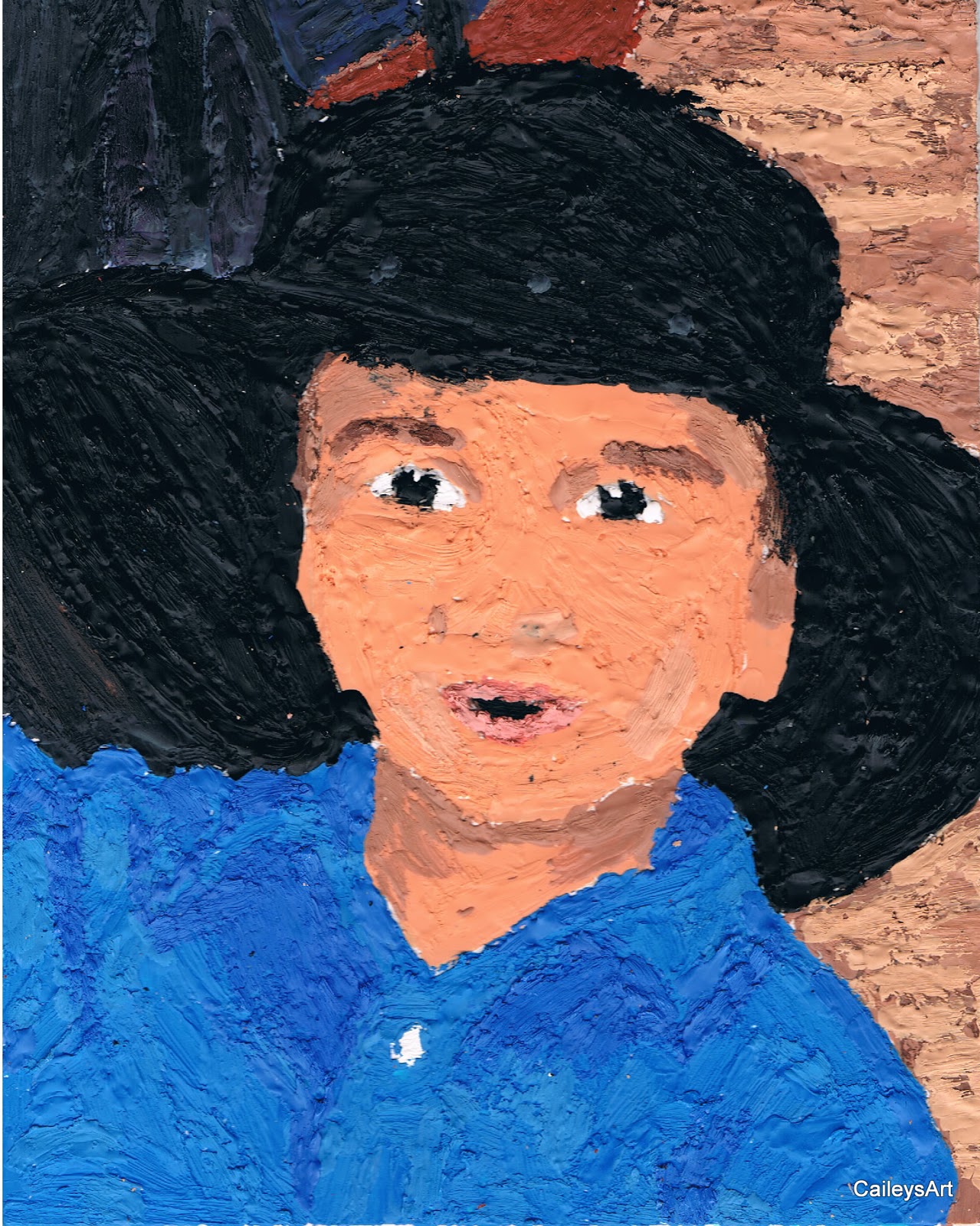 I made the batik with white fabric, melted crayons, and black dye. It was a pretty poor quality attempt and didn't work out very well; I couldn't keep the wax at a good temperature, and the dye didn't work very well. However, here's the image anyway: 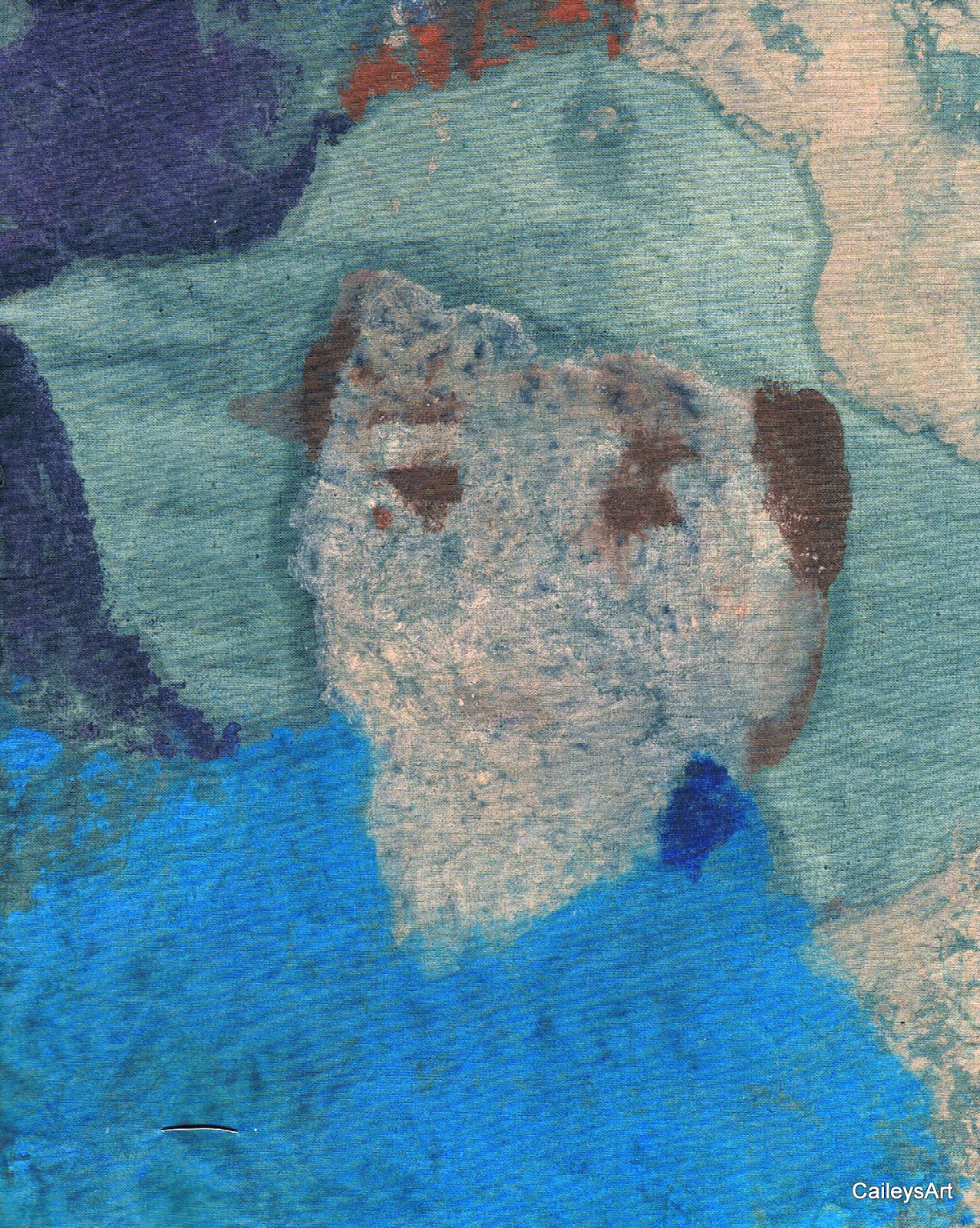 The next two are acrylic paintings done in the fauvist style, which basically means flat, unshaded areas of unrealistically bright colors. On the first, I made many of the colors simile to the original, and used the warm and cool colors to show light and shade. 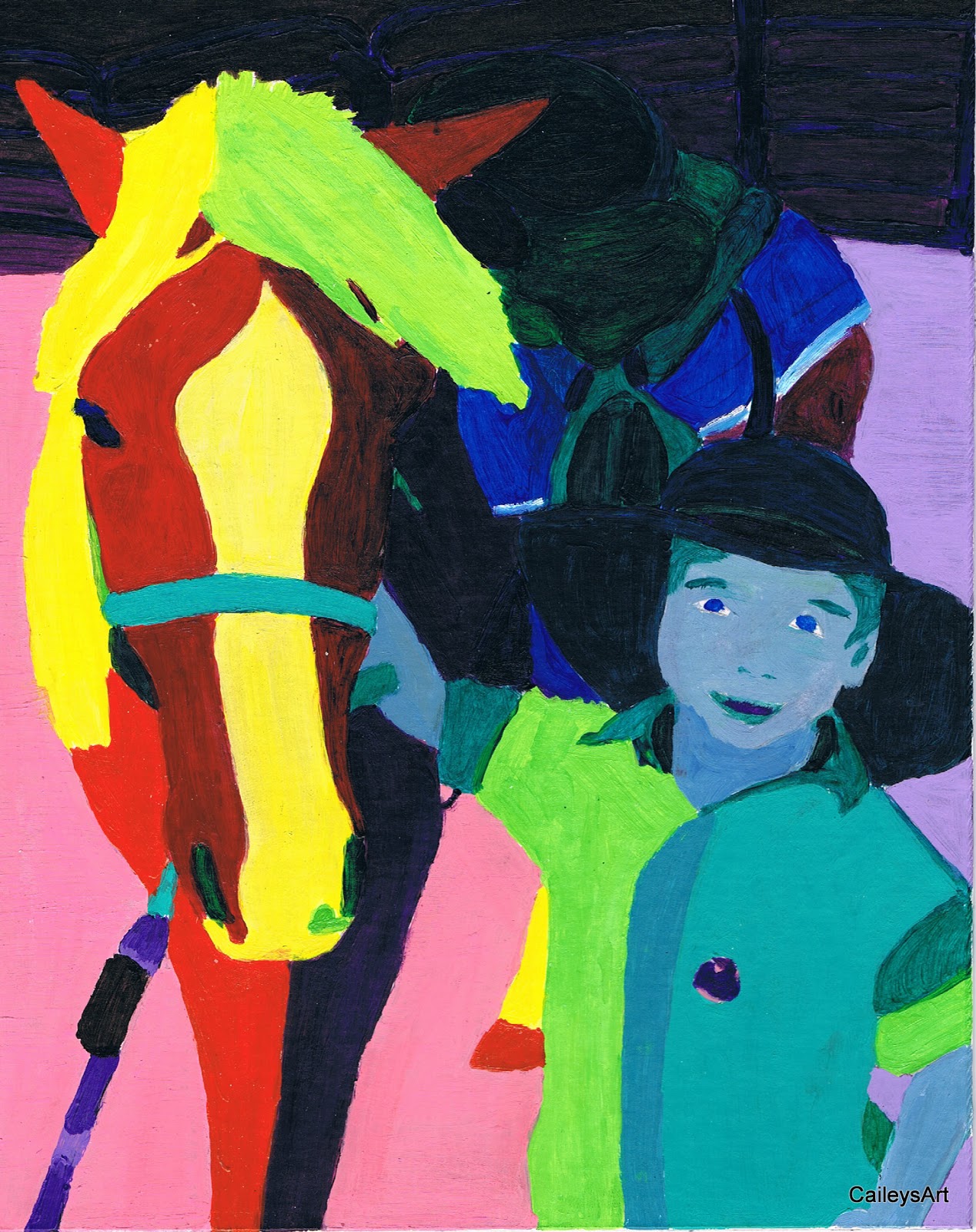 On the second, I basically inverted the colors. 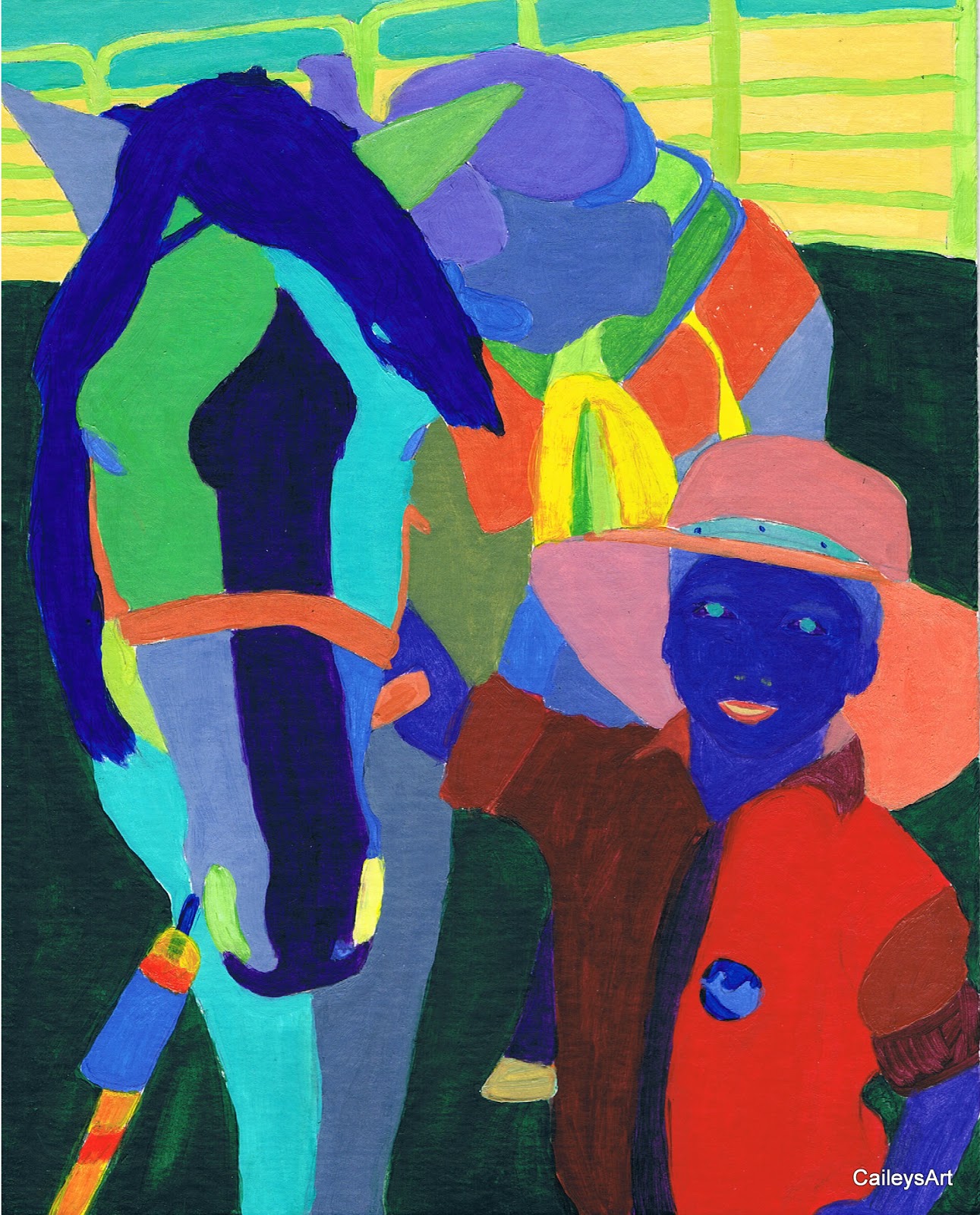 Next I drew it in pen and ink. I never used to be a fan of crosshatching (using lots of little lines crossed over each other to create shading), but when I got my first dip pen, I decided to practice and found that it wasn't actually so bad! 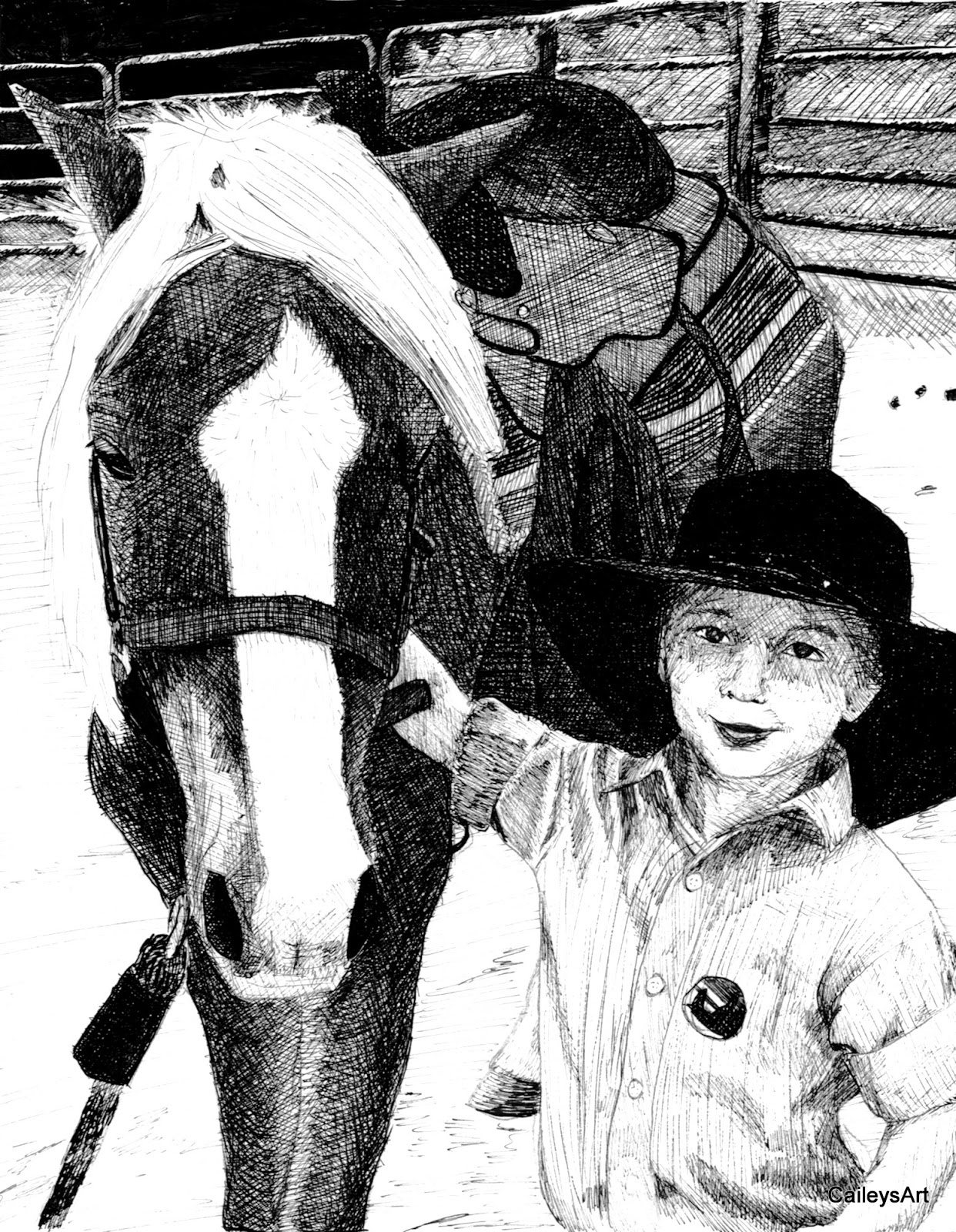 My last and favorite piece was the charcoal: 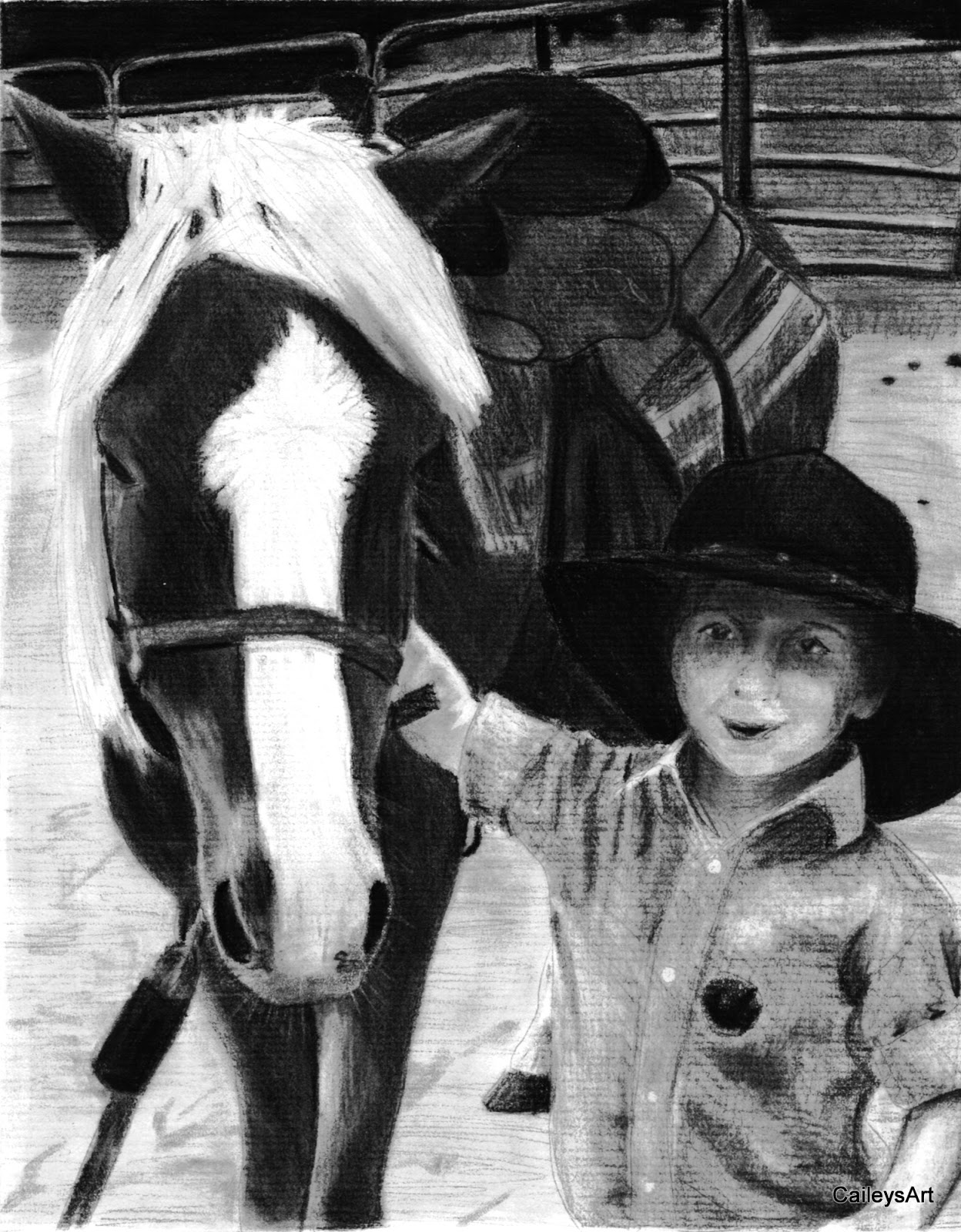 prints of this one are for sale on Etsy! Check it out--Little Cowboy Print

Which one is your favorite?
-Cailey
Posted by Cailey at 5:20 PM