I made the original charcoal drawing for "Two Girls with Guitar" last fall at a church youth retreat. The two girls were sisters I met and hung out with one afternoon. They were both musicians, and the three of us had a little worship time, just playing and singing various worship songs. Other people joined us at times, and we all talked and got to know each other. It was a really experience for me, because I don't normally make friends with other people on those sorts of retreats. I'm usually one of the people who joins in for a few minutes and stays on the edge of the conversation. When I got home, I used the drawing to make this collage, called "Surrender": 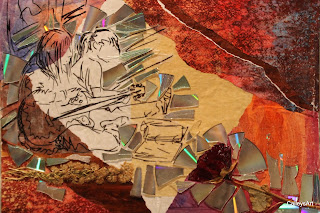 I used tracing paper for the outlines of the girls, and glued that over the colored torn paper. I then arranged the dried flowers and broken CD shards around them. It's really cool looking in person, with the flashing CD bits and the effect of the glossy finish over the colored paper.

When I first started the collage, I planned to name it "In the Moment", but "Surrender" began to grow in my mind. I guess I'd been thinking about the word a lot because one of my art assignments was to make a collage called "Surrender". I had an idea for that, but as I was working on this piece I came to the conclusion that this piece fit the name much better than my other idea. The idea is of surrendering to the music, and more specifically to the meaning behind the music.

The broken CD is what really makes the connection between the piece and the name. Essentially, surrendering is breaking your own desires for those of the one you're surrendering to. In war, an army's surrender means losing or breaking their chance to win by giving in to the opposing army. In this collage, surrender means breaking human desires and giving in to God's desires. The CD symbolizes those human desires breaking at these two girls give themselves to God and God's plan. I guess the collage is sort of a prayer for them; I pray that they will fully surrender to God so that he can work through them.

I'm sitting in my dorm room right this moment, but next time I go home I plan to find their email address (I have it written down, and I think I know where the paper is!) and let them know about it. I might even send them each a print if I can pull together some money ;)

Girls, if you're reading this, "Surrender" is my prayer for you.
-Cailey
Posted by Cailey at 11:23 AM