Hey there! Today is a special day, because I am hosting my very first guest post here at See Cailey Color. Lisa is one of my best friends and the beautiful mind that brings This New Adventure to life. She is a dancer, writer, and theatre extraordinaire, who just happens to love art history, as well. If you like what you see, you should definitely check out her blog, where she writes about her life, thoughts, musings, and the exciting new adventures she's undertaking.

And now, without further ado, I present

Being a “guest writer” makes me feel very special and important. Though I don’t quite feel qualified for this and honestly I’m pretty nervous. But I can tell I’m excited because I did research for this. Like, actual, legit book research not just Wikipedia and sketchily-sourced blogs.


I decided to start off my little mini series with the brilliant Edgar Degas. I wish I had some inspirational, well thought out reasoning for starting with him but honestly I just love him. What more reasoning do I need. Edgar Degas is most famous for his paintings of ballerinas. I have been a ballet dancer for five years (though I still have trouble calling myself a ‘ballerina’) so naturally his work interests me. It was not until last year when I bought a monthly calendar of his paintings that I really began to take an interest in the artist as well as the art.

Edgar Degas was born in 1834, in Paris, France, which at the time was the art center of the world. Degas was brought up in a wealthy banking family, and he was well educated in Latin and Greek and ancient history. For a little historical background, in 1834 Andrew Jackson was president of the United States, Charles Darwin went on an expedition in Rio Santa Cruz, sandpaper was patented, and the Whig party was officially created. (This information comes via Wikipedia. I never said I didn't use it, I just said I did book research too.)

During the time that Degas began painting, there was this huge art dispute between the Impressionists and the Neoclassicalists. (word? Not word? idk. My spell check is telling me Neoclassicist so we’ll go with that.) The Neoclassicists were more of the purists, arguing that paintings should be simple and realistic. An example would be this Neoclassical painting with Tom Selleck’s face photoshopped over it: 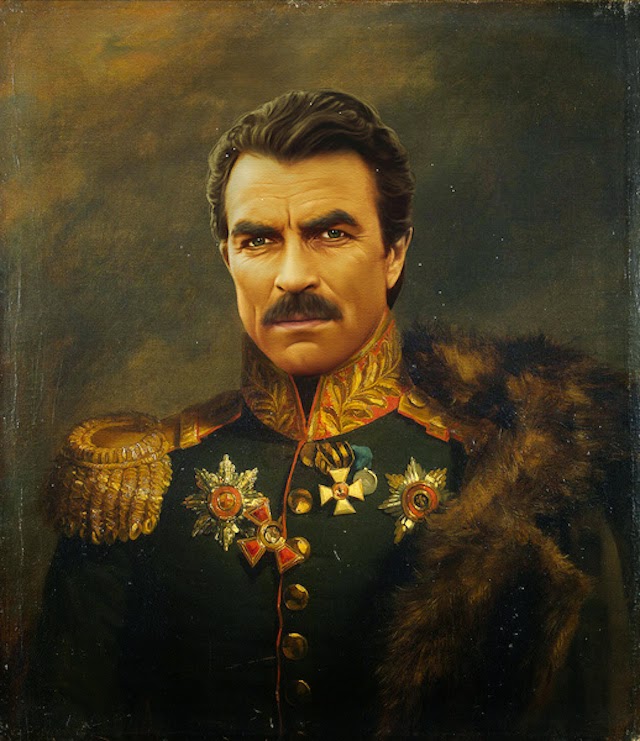 [Quick note from Cailey: this image is from the Replace Face Project, which is really, incredibly awesome and you should definitely check it out. Neither Lisa nor I own this or have any rights to it!
Okay, back to Lisa]

Basically Neoclassicists were the crotchety old men complaining about kids these days with their texting and murder. The Impressionists were the cool hipster teens insisting that “It’s not a phase mom, it’s who I am.” Their paintings were much less stiff and formal and their brushstrokes were more obvious. The most famous examples of this style are “Starry, Starry Night” and “The Scream” but those are waaaayyyy too mainstream, so instead I will show you this one called “In the Garden” by Richard Emil Miller: 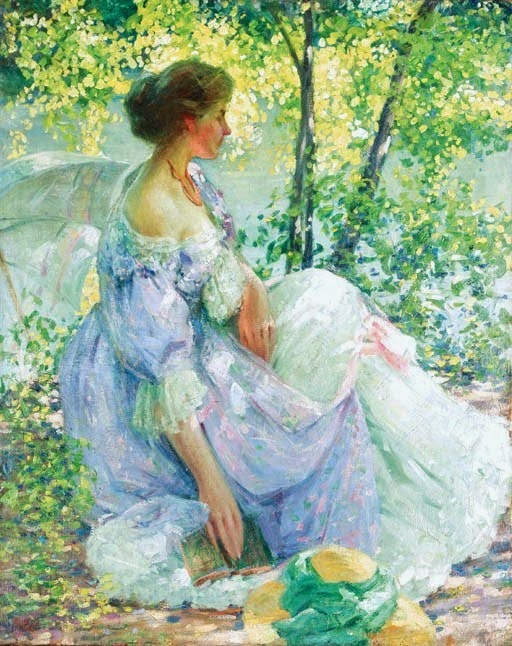 Gorgeous right? Right. So anyway, Degas began his art in the time when these two styles of arts were in the middle of a little cat fight about which style was better. Degas tended to lean toward the Impressionist style, though his early works were Neoclassical enough to get noticed. One of his early works was the painting “The Bellelli Family.” 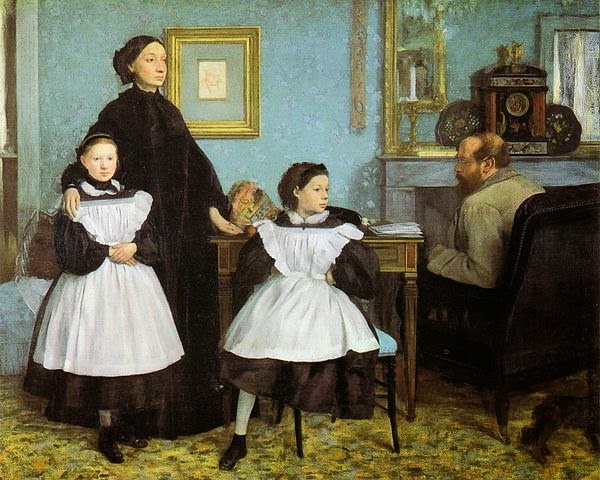 Slightly more obvious brush strokes than a Neoclassical, but still and formal. The works we know Degas for are the ones he painted of ballerinas. He produced approximately 1500 works on them, mostly in the 1870’s. He liked to depict them, as well as the people in his other paintings, doing boring everyday things such as “Dancers Practicing at the Barre” or “Dancer Adjusting Her Slipper.”

One of his most famous paintings is “The Dance Class.” 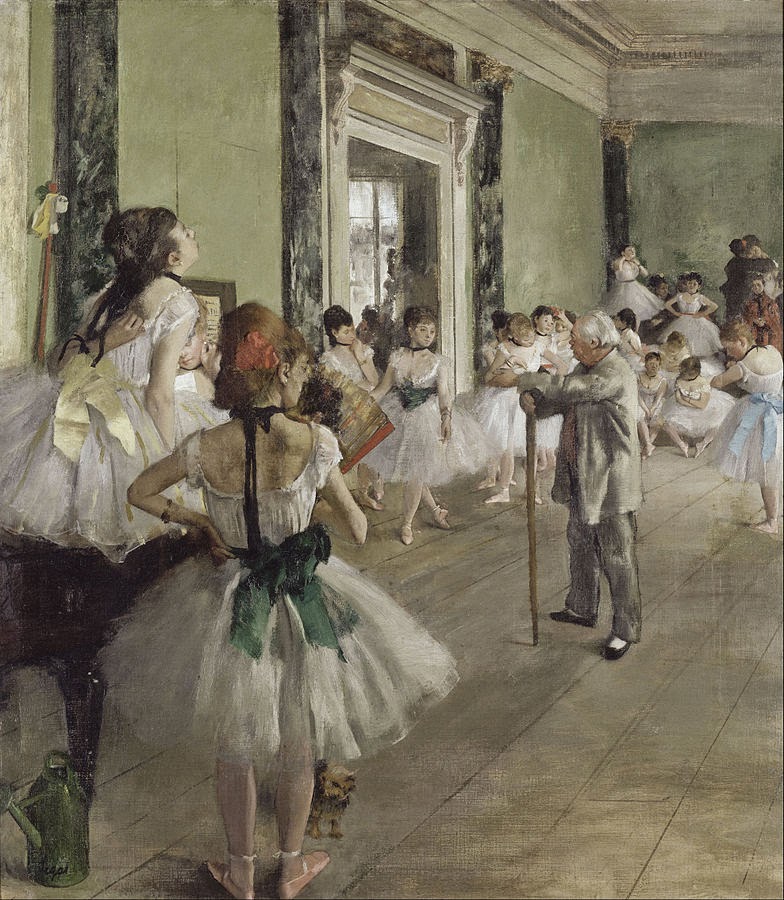 In this painting you see a girl sitting on the piano scratching her back, while one in the back stretches out her feet and one adjusts the ribbon around her neck. This was very different from the time when paintings showed people formally posed, or sitting gracefully and romantically in a field of flowers.

To summarize, Edgar Degas was a man who, when everyone was arguing about THE way to paint, just did whatever the heck he wanted and got famous for it. His works became fewer and farther between as he got older and lost most of his sight, but he did do a few wax models. He only ever showed one of these, Little Dancer Aged Fourteen. He died in 1917 when he was eighty-three years old. Yet his paintings are still well recognized to this day, especially by us dancers who really appreciate anything that acknowledges dancers in a positive light. 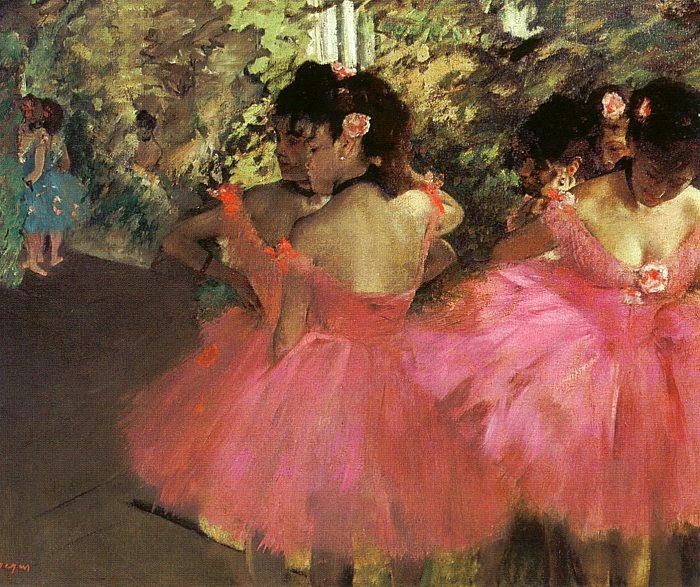 Thank you, Lisa, for your great explanation of Degas, Neoclassicism, and the birth of Impressionism. Once again, please go to Lisa's Blog to enjoy more from her! And stay tuned, because in the near future Lisa will have more for us here at See Cailey Color. I can't wait!

Want to welcome Lisa to See Cailey Color? Got any questions or thoughts to add? Want me to give you yet another link to her blog (because two just doesn't cut it)? Comment below!
-Cailey
Posted by Cailey at 9:06 AM