Describe yourself with one word.

That's the question I asked on Facebook last week. I have an art project in mind, so unless you hate art and culture and me, comment and describe yourself with one word. That's basically what I told them.

Only one word, no hyphens, but besides those two rules, you have your entire vocabulary to choose from. That means, if you're like the average adult, you probably have some 20,000-30,000 words to choose from. It's a little daunting, huh? But really, if you think back to grade school when you learned the different parts of speech, you can weed out a lot of words pretty quickly.

Unless you want to be either very, very creative or just downright unhelpful, you'll probably eliminate articles and conjunctions (like to, a, if, and, the, and but) and prepositions (such as over, under, and beside). You'll probably choose to eliminate nouns and pronouns as well, like dog, museum, paper, linoleum, he, she, and they. But that's really up to you. A couple of my favorite responses were nouns, and they actually have a lot of meaning when you really think about them.

Next are verbs and adverbs. Once again, these would be a little more creative, but for this project, it's perfectly valid to describe yourself by something you're doing. Growing, changing, running, hiding, learning, teaching.

Finally, adjectives. Adjectives are certainly the most popular part of speech chosen for this project, and there are a lot more adjectives than the classic grade school answers of soft, fluffy, and sticky. Words like determined, popular, or unique. An adjective is definitely the most logical word choice for describing yourself, since adjectives describe nouns and you, as a human being, fall into the noun category.


So I asked this question on facebook three times, and from those three posts I got a total of 97 responses.

97 responses, and they were all really interesting and thought-provoking (and some were funny).

The question, and the many responses, made me think a lot about myself. I know you're not supposed to ask a question like that if you don't have an answer for yourself, but if I'm entirely honest, I don't know what word I would give.

I also thought a lot about the different responses, and the people who gave them. Each response is one person. One heart. One soul. Some I know very, very well, and others I've only met once or twice. And as I said on Facebook, it might seem like each person just contributed a word, but in reality, each person contributed a bit of their own self. I was and am so grateful for the huge response from my Facebook friends. It's not an easy question, and I have a feeling some of those responses took some courage. Each word adds meaning and soul, and what is a heart without meaning and soul? Just a fancy muscle. I wanted to convey that in the art project, and since the soul is not a physical part of the body, I drew a heart surrounded by the 97 words. 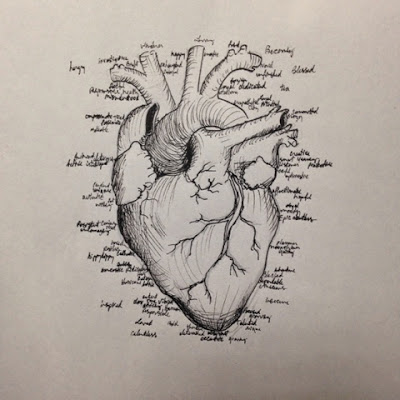 But this drawing of a heart, like each of the many single-word responses people gave me, is only the tip of the iceberg. My plan is to draw a small representation of each word, creating a total of 97 drawings. I started them on Saturday. Some of the words are a little easier to illustrate than others, but I'm really excited about what the finished collection will look like.

I want the meaning of the work to really stand out, so I'm keeping the materials simple. Black ink and white pastel on newsprint. Nothing fancy, no colors or complicated processes and techniques to distract from the meaning.

So, ladies and gentlemen, welcome to 97 Hearts, an exploration of self-perception: 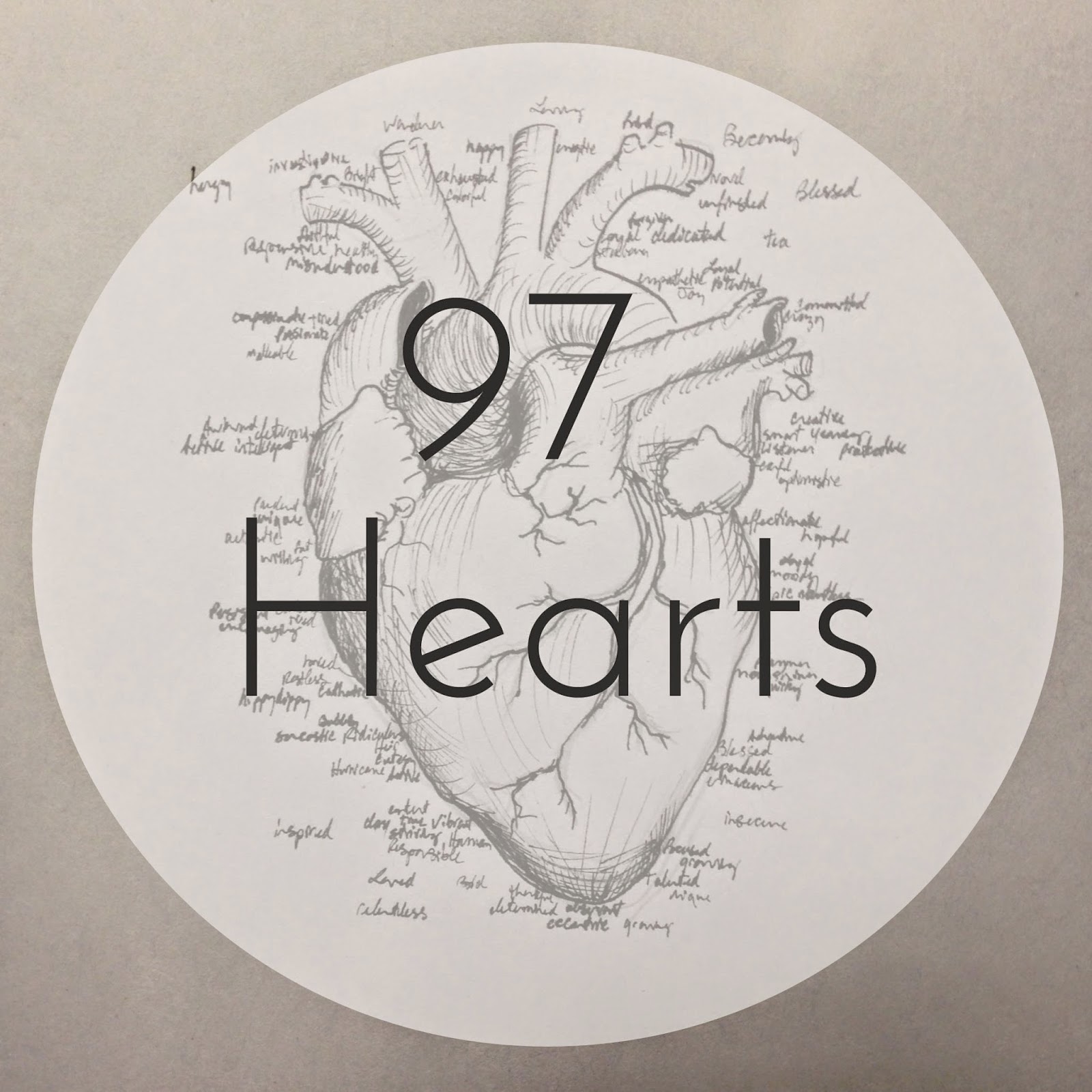 As I finish the small drawings, I'll share them with you. Here's the first one I did, titled Growing: 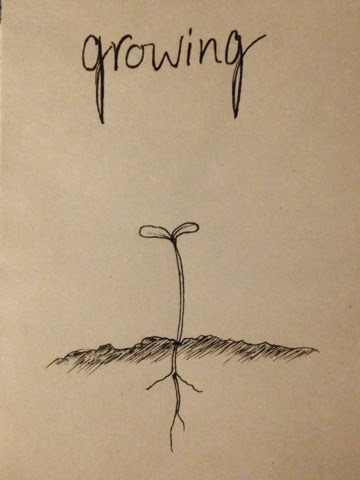 I know, I know. I really should have a word for myself, if I'm going to make this a real art project. I'm considering the word "becoming"... Or maybe "intrigued"... Please excuse me, all this self-reflection calls for some time with my journal!
-Cailey
Posted by Cailey at 7:06 PM