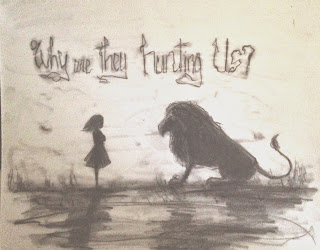 My friends, Silhouette Girl is at it again. Recently, I was sitting in class, sort of paying attention and sort of day-dreaming, and a new image for Silhouette Girl came to mind.

In my literature class this past semester, we talked a lot about human suffering and the various social problems in the world, including racism, human trafficking, domestic abuse, healthcare, poverty, etc. It was really great because each day we not only discussed the social problems we read about, but we also got to learn about an organization through which people are actively seeking to make a change.

So. Is she staring down the lion? What are they doing? Are they communicating? Is she the one
asking the question, or did the lion ask it? Or both? Is the lion a lion, or a symbol of the social problems in this world? Who is the silhouette girl? Who is the hunter?


Who is the hunted?

Lions are known for their nobility and strength. They are fierce, powerful predators. Everything about them is regal, dominating, impressive. And yet they've been hunted for thousands of years.

In ancient Egypt, pharaohs hunted lions for sport, to demonstrate their strength and power . For ages since then, the Maasai people of Africa have hunted lions as a rite of passage. And for a long time during the 19th and 20th centuries, wealthy English and American travelers would go to Africa on safaris and lion-hunts. It was trendy.

Today, African lions aren't endangered, but they're vulnerable, and headed that direction. Thanks to loss of habitat and poaching (hunting), the number of lions in Africa is below 40,000. Compare that to 1950, when there was an estimated 400,000 lions roaming the African plains.

Lions aren't the only animals facing endangerment. It's no secret that many animals have been hunted to extinction, or nearly that.

If the king of the jungle is hunted,
do not doubt children are, too.

How can enslaving a small, defenseless human compare with tracking and defeating the king of beasts? It doesn't. I definitely don't condone hunting lions, but I will say that it is a challenge requiring great skill, strength, and courage. But trafficking children, or "hunting" them, as I'm calling it, is the opposite. It is despicable and cowardly. Children are hunted for money, not for the prestige of having killed the king of the jungle. Children are hunted for

Children. Lions. Hunted. Why are children hunted?! Sex. Cheap labor. I've written about it before.

Each Year:
20.9 million people are trafficked each year for commercial sex or forced labor. Half of them are children. 2 million of those children are exploited in the commercial sex trade.

And that's just the kids hunted for sex. Another 250,000 children are soldiers. 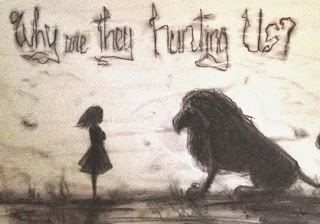 HOW IS THAT OKAY.

It's not.
It's an abomination.

Let's talk about this.

Let's talk about the hunted ones. Let's identify them, and let's protect them.

*all my lion facts and numbers come from Wikipedia. I got tired of researching, but Wikipedia is actually great for quick facts because the information is constantly being edited and updated to ensure reliability. Don't bash the wiki!!
**all human trafficking statistics are from equalitynow.org, the Sex Trafficking Fact Sheet, and warchild.org. Please visit those sites or google "human trafficking" or "child soldiers" to learn more about how you can help end this, once and for all.
Posted by Cailey at 6:52 PM