I was seven and a half years old when I became a big sister.

We were all very excited about the baby coming, and I was particularly excited because it was a boy, which was what I'd been hoping for. . My sister and I did everything we could to help Mom prepare our brother's room, pick out baby clothes, and get toys for him. We tracked his development with the baby books Mom got, and gave suggestions for names. I had this great idea that his name should be Timmy Timothy (don't ask why; I was only seven, after all!).

One day in October my sister and I went to a friend's house to play while Mom went to a doctor appointment. That afternoon, Mom called and told us, Surprise! The doctor said our baby brother was on his way! Mom had to have a c-section, but I didn't really know what that meant, otherwise I probably would've been pretty worried. All I knew was that my brother was finally coming out of Mom's belly.

When we finally got to visit Mom and the baby, I was pretty enchanted with that ugly little alien-thing. I'm just kidding; actually he was one of those rare cases in which the newborn actually isn't ugly! Anyway, I had a paper crown I'd made for him which I was very excited about. However, when I walked into the hospital room and saw my mom on the hospital bed and the precious little red, wrinkly baby in her arms, I got really nervous. I just knew that I'd drop him and he'd shatter like one of Mom's nice glasses, and the nurses would have to clean all bits of baby off the floor.

Because I was nervous, I let my sister hold our brother first. Once I was convinced that I could touch him without breaking him, I took my turn and discovered that holding a newborn baby isn't as scary as it looks! Unfortunately, my parents didn't name him Timmy Timothy. Oh well, ya can't have everything.

Over the coming days, months, and years, my sister and I hovered over that kid like he was the first child ever born. Between the two of us carrying him around, it's a wonder our brother learned to walk! And it's a wonder he learned to speak normally, as opposed to the cooing baby-voices we used around him. 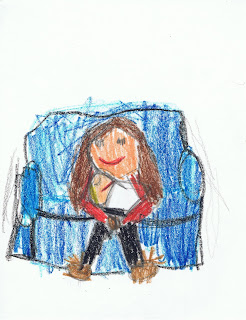 This is a drawing I made around that time of myself seated on the couch holding my baby brother. This is definitely museum-worthy, right?
-Cailey
Posted by Cailey at 4:37 PM