I apologize for the unexpected month I took from blogging! You see, I ran out of pre-written posts and then homework, other commitments, and lots of lame excuses started building up and now here we are. So here I stand, dear readers, hands clasped before me, gazing up at you with the same guilty and sad expression seen in all those "puppy-shaming" internet memes. You know, the ones where there's a picture of a sweet, pitiful little dog with a sign saying the dog likes to play with toilet paper or eat fresh pumpkin pies.

Okay. With that out of the way, I want to tell you all about my recent trip to Lake Erie!

My Mom and her dad both grew up in northern Ohio. When my Fall break came around, my family made plans to visit Mom's hometown. It had been many years since she'd been there, and even longer since my grandpa had been there, so we all packed up the van and made our way to the little town of Milan, Ohio. You might recognize that name from fourth grade when you learned about Thomas Edison--yes, my mother grew up mere minutes from Thomas Edison's birthplace.

We stopped Friday night in Columbus, Ohio to have dinner with my Great Grandma. With bellies full of delicious Mongolian barbecue and hearts full of wonderful love and laughter, we spent the night at my Grandparents' house. Early the next morning, we got back on the road.

We stopped to pick up Poppa and continued on to Milan. Our first stop was Edison's birthplace and childhood home, but we found the Edison museum was closed. We walked around a little bit admiring the beautiful historic Milan, and then went to get lunch at Mom's favorite teenage hangout, Jim's Pizza Box.

It was delicious. I sort of lost count of how many pieces of pizza I ate, but I think it was five or six.

After lunch, we walked around downtown Milan. It's a pretty tiny town with a population of just 1,300. I think Mom or Poppa had some sort of connection to every single person we saw--this person was Mom's middle school gym teacher, that person was one of Poppa's old buddies. Of course, it's not like we saw many people; the place seemed like a ghost town to this city girl! But it was all very charming, and it was great getting to hear Mom's and Poppa's stories.

After spending some time in Milan, we went north to see Lake Erie. We found a little beach and we all got out, but it was raining so we didn't spend much time there. I did, however, touch the lake, pick up some pretty stones from the beach, and take pictures: 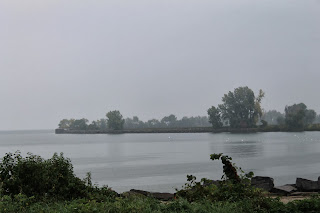 (This was taken from the dry safety of the van--I'm not about to risk the death of my precious camera!)

In the lower right corner you can see a tiny bit of the beach where my siblings and I played in the rain for a few minutes. That was fun.

After that we went to the town of Port Clinton, where we spent a while walking along the lake. Thankfully it stopped raining, so I was able to take lots of pictures! 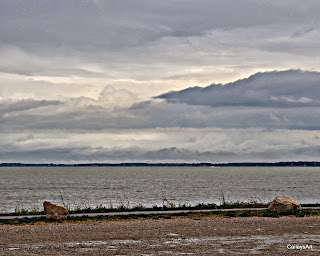 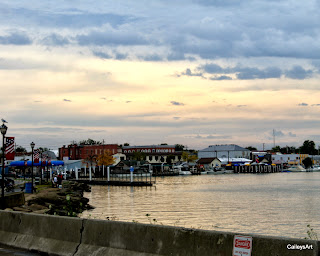 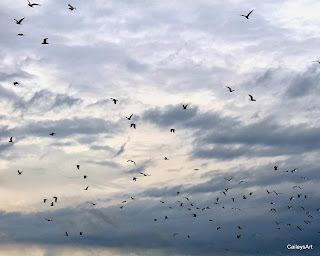 There was a big flock of seagulls just chilling next to the lake, so Mom and I decided to mess with my very gullible 12-year-old brother. We told him that seagulls like to play soccer, and that if he kicks a ball at them they'll hit it back with their beaks. That lead him to spend some five or ten minutes kicking the ball at the seagulls. I'm not sure when he figured out we were kidding, but I'm sure at some point he must've stopped believing us and just kept kicking the ball at them to scare them and make them fly up. 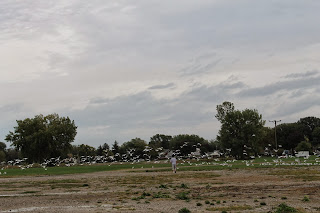 You can kind of see my brother there in the middle of the picture.

We all had great fun playing at Port Clinton, but it was nearing the time for us to go to my Uncle's house and spend the night. We stopped a little restaurant and ordered a snack of hush puppies and fried walleye fresh from Lake Erie (walleye is a kind of fish). It was so good! So light and fresh and yummy, you could tell it had been caught that very morning. And fried. Fried is always good.

Then we got back in the van and made our way to back my Uncle's house in central Ohio, dropping Poppa off along the way so he could go back home. We ate barbecue and watched Ohio State beat Northwestern in a very close and harrowing game, and then went to bed happy and exhausted.

The next morning we went to my Uncle's church, had lunch with my Aunts and Uncles and Poppa, and later that afternoon we got back in the car for the three hour trip back home.

It was a great weekend. Maybe soon I'll share some of the history of Port Clinton, where my family spent much of the afternoon playing and scaring seagulls!

I apologize again, dear readers, for abandoning you for a month. You're still my favorite readers, don't worry!
Posted by Cailey at 11:39 AM