Wow, this has been a busy few weeks/months for me, and I don't foresee anything letting up until Thanksgiving break. Excuse me while I catch my breath for a moment!

Shew, okay. No more panting or gasping for air. I think I can talk now.

I've had so many tests and big assignments due these past few weeks, I honestly don't know what hit me! Juggling school, all these new relationships, and art and blogging feels almost impossible sometimes. I'm sad to say it, but my new camera hasn't seen the light of day since October 5th. My pencil box and drawing paper have been used much more recently, but that's because I'm drawing hands performing ASL signs for my required service hours here at school. I'm "working" on a little painting, but I unfortunately haven't been able to actually do anything with it in a week. But don't worry, I will show it to you when it's done and it'll be awesome.

This weekend was hard for me and my family. Our dog, Bonnie, passed away Sunday morning. She was fourteen years old and had been pretty sick for about two weeks, so we were expecting it, but it was still really hard. So today I want to share some pictures I of her that I've made in the past few years: 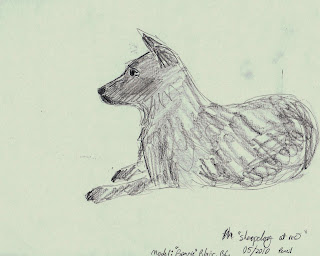 Bonnie was seriously the best dog anyone could ask for. She had a problem with running away in her younger years, but unless a neighbor caught her she was rarely gone longer than fifteen minutes before she'd show up on my front porch again. She rarely barked, she never jumped up on people, and she didn't chew or rip things up. She was a little lady, content to just curl up on the floor and lick my dad's feet. 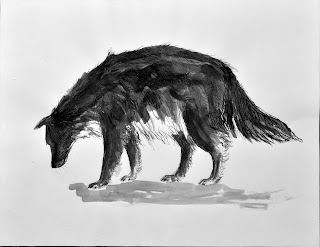 As a border collie, she had a strong dose of the sheepdog "herding instinct". When my brothers were small, she'd keep them away from the fence in the backyard. My family had a pair of pygmy goats for a few weeks (it's a sad story... apparently my suburban neighborhood isn't okay with farm animals, even two-foot-tall ones that make very little noise and somehow happen to not stink!), and Bonnie liked to herd the goats around the back yard. I think that was the happiest two weeks of her life. 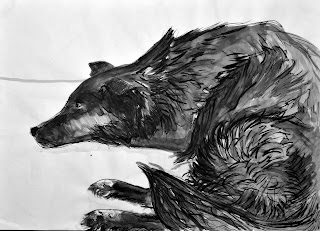 She was a super friendly dog. My family joked that if someone tried to break into our house, Bonnie might manage to lick them to death... that's about it. She didn't have an aggressive bone in her body (except when it came to cats... she was expert cat chaser!). And her friendliness was a good thing; no one wants a mean dog around kids! But she wasn't just friendly; she was a wimp. She was absolutely terrified of thunder, and whenever there was a storm she would follow my dad or me around the house as we went about our business, curling up at our feet whenever we stopped to do something. It would've been annoying if it weren't so pitiful! 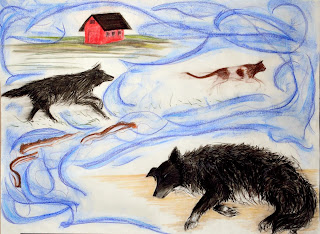 2012 "Bonnie's Dream", charcoal and pastels
(Apparently I had something against drawing her facing to the right...?)

In the last two years or so Bonnie suffered from arthritis in her hips, making it difficult for her to go up and down steps or stand up after sitting or lying down for long periods. I always felt bad when the family would all go downstairs to watch football or something, because I knew Bonnie desperately wanted to be around people but couldn't do the stairs. She fell a few times, and we sometimes had to carry her up if we left the door open and she got in the basement. It made me sad to see her motions so limited, when just a couple of years before she was known as "houdini" and a "master escape artist"--she could find and slip through holes in the fence that you wouldn't even know were there!

In the end, her passing was a good thing. She was so sick for the past two weeks, she couldn't stand or even lift up her head. It was heartbreaking to see her like that, and see her once-sleek and shiny coat become rough and scraggly, her once-bright blue eyes looking dull and sad. My dad had actually called the vet about putting her down later Sunday evening. I guess it really was time, because we came home from church Sunday morning and found her right where we'd left her, with no change at all except that she was no longer breathing.

I loved my dog. I hope she's found some sheep or children or baby angels to herd up in Heaven!
-Cailey
Posted by Cailey at 6:18 PM